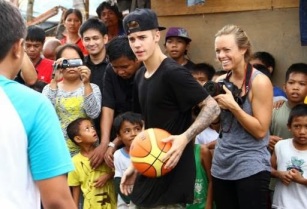 Pop musician Justin Bieber is in Tacloban recently to give cheers to the victims of Typhoon Haiyan. TV5 will air the documentary tonight.

Tonight’s lineup of TV5’s ‘Weekend Do It Better’ will not see Edu Manzano interview various guests on his talk show ‘What’s Up Doods?’. Instead the Kapatid network will air a special documentary as part of its continuing relief efforts for the victims of Typhoon Haiyan (Yolanda).

Titled ‘Give Love, Give Back Philippines‘, the documentary centers on a surprise visit by pop singer Justin Bieber to Tacloban in order to provide donations and relief goods to the typhoon victims. The one-hour documentary will feature Bieber in a different light, as he tries to remain humble amid his fame and give a more positive outlook to the victims. Also included is the exclusive full-length interview with Raymond Gutierrez that first aired on ‘Showbiz Police’ last week, along with a mini-concert for the victims.

Bieber’s #GiveBackPhilippines campaign raised over $1M in cash, and has also produced a limited edition t-shirt with the proceeds being given to TV5’s Alagang Kapatid Foundation. The campaign donations were raised during his ongoing tour promoting his latest album ‘Believe’.

‘What’s Up Doods?’ aired a ‘Best of’ episode last week featuring interviews from Georgina Wilson, Jinri Park and Ramon Bautista, and with the program on hiatus for the holidays, it is only logical to have the Bieber documentary air tonight.

In the meantime, here is today’s late afternoon and evening schedule on TV5:

9:45 – Give Love, Give Back Philippines: A Justin Bieber Special

2 thoughts on “‘What’s Up Doods’ Preempted for Bieber Documentary”