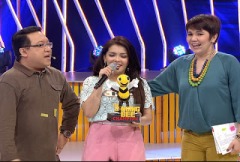 ‘The Singing Bee’ will now be seen six times a week starting February 24.

With ‘Kapamilya: Minute to Win It’ about to finish its run this week, ABS-CBN didn’t look any further for its replacement. And it happens to be another game show.

‘The Singing Bee’, already a highly-rated show on Saturday afternoons, will now be seen six times a week beginning February 24. The game show will air every weekday mornings just before the highly-rated series ‘Be Careful with My Heart’. Previously ‘The Singing Bee’ aired during weeknights in its first season.

Since it debuted in November 2013, ‘The Singing Bee’ has become an instant ratings hit, thanks to the chemistry of hosts Roderick Paulate and Amy Perez, and its unconventional format of contestants guessing a missing lyric while singing. ‘The Singing Bee’ was such a big hit that it forced rival ‘Startalk’ of GMA Network to move back to Sunday afternoons last January, and with its run now extended to weekday mornings, it is expected to outdraw ‘Tunay na Buhay’ as well.

Meanwhile, the final two episodes of ‘Kapamilya: Minute to Win It’ will have Angel Locsin as a contestant. In the weeks leading up to the finale, Locsin and host Luis Manzano were reported to have reconciled and started dating again after a few years’ separation. As a result, the finale of MTWI is shaping up to be one of the most highly-anticipated episodes in the program’s one-year history, and should give ABS-CBN a ratings victory in the weekday morning slot and some much-needed momentum for the entry of ‘The Singing Bee’.

One game show out, another comes in. It looks like ABS-CBN found a great opportunity to extend ‘The Singing Bee’ to weekdays. And it should pay off in a weaker morning field.