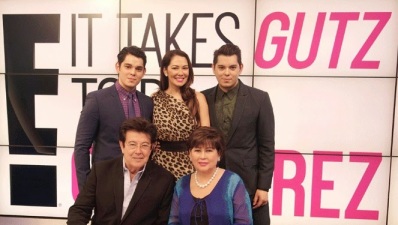 A ratings hit on E!, ‘It Takes Gutz to be a Gutierrez’ will now cross over to free TV, as TV5 picked up the series starting this July.

The highly-rated E! reality show ‘It Takes Gutz to be a Gutierrez’ is now headed to a bigger audience.

TV5 has announced that the series starring the Gutierrez family will premiere this July 5. ‘It Takes Gutz to be a Gutierrez’ will replace ‘Celebrity Dance Battle’, whose final episode will air tomorrow.

The series will showcase the personal, business and family lives of siblings Richard, Raymond and Ruffa Gutierrez, along with their parents Eddie Gutierrez and Annabelle Rama. It will also feature guest appearances from the other members of the Gutierrez family, as well as celebrity friends and staff.

‘It Takes Gutz to be a Gutierrez’ has been a ratings hit for E!. The reality series broke the network’s ratings records, not only in the Philippines, but also in Southeast Asia. It was also a hit in social media, particularly when Richard introduced audiences to Zion, his son with girlfriend Sarah Lahbati.

The free TV premiere of ‘It Takes Gutz to be a Gutierrez’ is only one of several programming changes that TV5 will implement this July. New seasons of ‘Face the People’, ‘Let’s Ask Pilipinas’ and ‘Talentadong Pinoy’ will also premiere, albeit with new hosts, while new programs ‘Trenderas’ and ‘Quiet Please’ will also join the network’s revamped lineup.

It should be an interesting quarter of change for the Kapatid network, beginning with the clan dubbed as the ‘Asian Kardashians’.