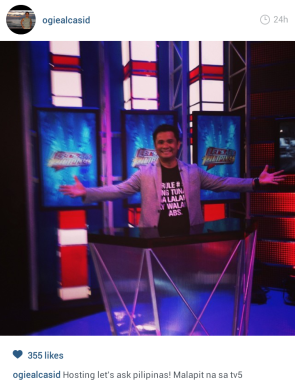 TV5’s two standout programs are back, with new hosts eager to make a mark.

It was announced that ‘Face the People’ and ‘Let’s Ask Pilipinas’ will return for another season this Monday. The former will now air at 10:15 a.m., followed by the latter.

In addition, both programs will receive new hosts. Edu Manzano will now join Gelli de Belen and Tintin Bersola-Babao as the third host on ‘Face the People’, while Ogie Alcasid will replace Aga Muhlach for ‘Let’s Ask Pilipinas’.

Edu was last seen regularly as host of ‘What’s Up, Doods’, which ceased production in December 2013, while Ogie will return to weekday programming three weeks after his tawaserye ‘Confessions of a Torpe’ ended on June 20.

Both programs were once aired as part of the now-defunct ‘Everyday All the Way’ afternoon to evening block. ‘Let’s Ask Pilipinas’ was last seen on March 28, before it was replaced by ‘Beki Boxer’, while ‘Face the People’ aired its last episode on June 6, before it gave way to a re-run of ‘Star Confessions’.

Their transfer to the morning slot is intended towards the accommodation of upcoming sports events on the Kapatid network. TV5 is slated to air the Gilas Pilipinas matches in the FIBA Asia Cup, the FIBA World Cup, and the Asian Games, along with the Nanjing Youth Olympic Games.

The return of both programs is just one of several programming changes that TV5 will implement this month. More on the other changes in future articles. 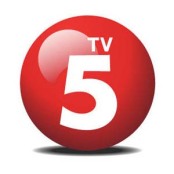 The painful rebuilding process continues for TV5, in an effort to earn a sizable audience.

Over half a year ago, TV5 established its ‘Weekend Do It Better’, ‘Karunungan, Balita at Opinyon’, and ‘Everyday All the Way’ blocks. However, as the calendar flipped to 2014, these programming blocks were deemphasized and it appears TV5 is not satisfied with how they turned out.

Through the first four months, TV5 gradually brought in new programs as part of its continuous restructuring process, which also included a relocation away from its old Novaliches headquarters in favor of the newly-opened TV5 Media Center in Mandaluyong. The adjustment to a new location was difficult though, as the staff attempted to learn new digital-based methods in producing its programs.

In the news department came in Saturday night public affairs series ‘Kaya’ and ‘Yaman ng Bayan’, and the Thursday night program ‘Bigtime’. On the other hand, ‘Good Morning Club’ once again claimed its position as the only morning news program with a running time of under two hours, when management decided to cancel the ‘Good Morning Girls’ and ‘Good Morning MamuTin’ segments (which were taped as opposed to live broadcast on other programs), and renamed ‘GMC’ as ‘Good Morning Ser’.

In terms of entertainment, TV5 replaced ‘Madam Chairman’ with ‘Confessions of a Torpe’, while introducing another ‘tawaserye’ in ‘Beki Boxer’. On the other side of the spectrum, ‘Celebrity Dance Battle’ essentially replaced ‘Killer Karaoke Pinoy Naman’, though the latter program remained on air until April, when it was finally cancelled in favor of the sitcom ‘One of the Boys’.

And finally, TV5 partially satisfied basketball fans by airing live PBA games almost every day in primetime, including an increase of Saturday broadcasts to two games. But with the network’s broadcast of the 2014 Nanjing Youth Olympics (and potentially the 2014 FIBA Basketball World Cup) a few months away, it is expected that more adjustments will be made in terms of accommodating the network’s sports coverage.

That said, TV5 should not stand pat and continue improving its lineup for the long term. It is a difficult and painful process, but when done right, the network’s fortunes should pay off.

Now what to do with AksyonTV? The question will be answered in another article.

The ABS-CBN sexy drama series ‘Moon of Desire’ is just one of several programs to debut in time for the summer vacation.

Summer is right around the corner, and to kick off the hot-weather months, the ‘Big 3’ networks unveil some new programs to begin summer vacation.

‘Moon of Desire’, a new series starring Ellen Adarna, JC de Vera, Dominic Roque, Miguel Raval, and Meg Imperial, will replace the recently-concluded ‘Galema: Anak ni Zuma’. The series picks up from where ‘Galema’ left off, using the same formula of casting a lead female protagonist (Imperial) in an unusual predicament. This time around, Imperial’s character suffers from hypertrichosis, a condition where her entire body is covered with thick hair. ‘Moon of Desire’ premieres today after ‘It’s Showtime’.

Just as ABS-CBN replaces its movie block with ‘Meteor Garden’, GMA has decided to go the other way around. A week ago, ‘GMA Sinebabad’ replaced the Koreanovela ‘Tale of Arang’, and its first week saw a pair of Korean films (‘My Tutor Friend’, ‘A Moment to Remember’) air in two and three-part segments, respectively. After the conclusion of ‘Paraiso Ko’y Ikaw’,  ‘GMA Sinebabad’ will be expanded to a 90-minute format, featuring classic Filipino movies every weekday. ‘GMA Sinebabad’ airs before ’24 Oras’.

And finally on TV5, ‘Let’s Ask Pilipinas’ will be replaced by a ‘tawaserye’ called ‘Beki Boxer’. In this series, Alwyn Uytingco portrays the lead role of a gay boxer who tries to reclaim his family’s honor after his father was humiliated in the ring. Also starring Vin Abrenica, Danita Paner, Christian Vasquez, Onyok Velasco, John Regala, Joross Gamboa and Claire Hartell, ‘Beki Boxer’ airs tonight after ‘Aksyon’.

In the meantime, enjoy a beautiful summer vacation.

Next week on ‘Everyday All the Way’, TV5 will unveil a new weekly drama series in ‘Obsession’. Like ‘Positive’, ‘Obsession’ will tackle issues concerning the health of the human body. This time, the series divulges into the world of cosmetic surgery, where the main character obsessed with her former lover assumes a new post-surgical identity. The series will be headlined by Bianca King, Neri Naig, Marvin Agustin and Martin Escudero, and will replace ‘For Love or Money’ at the 8:00 p.m. slot.

Cycle 2 of ‘Asia’s Next Top Model’ will also be seen on TV5. The Asian adaptation of ‘America’s Next Top Model’ will have a pair of Filipinos in Jodilly Pendra and Katarina Rodriguez compete against 14 other aspiring models in hopes of becoming the next top model. The series airs starting tonight replacing ‘Positive’ at 9:00 p.m.

In addition, TV5 has also unveiled a mix of new and returning programs that will be seen over the next few months. Returnees include ‘Talentadong Pinoy’ (albeit without original host Ryan Agoncillo), ‘The Amazing Race Philippines’, and ‘The Million Peso Money Drop’. Upcoming titles will include ‘For All the Boys’, ‘My Pirated Family’, ‘Minamahal’, ‘The Baker King’, ‘My Fair Lady’, ‘Pretty Little Liars’, ‘Jasmine’, ‘One Boy’, ‘Beki Boxer’, ‘My Brother’s Keeper’ and ‘Celebrity Dance Battle’. Details of the new shows should arrive once the teasers are revealed.

And even as TV5 unveiled new programs, some existing ones had to go. Both ‘What’s Up Doods?’ and ‘The Mega and the Songwriter’ were presumably cancelled by management for ‘not living up to expectations’. And there is also the uncharacteristically early sign-offs on nights without PBA games, after AksyonTV original programs like ‘Cocktales’, ‘Crime Klasik’, ‘Wasak’ and ‘Chef vs. Mom’ were cancelled. Simply put, the management handled by Noel Lorenzana and Wilma Galvante have a long way to go before stabilizing the network’s programming.

Nevertheless, both ‘Asia’s Next Top Model’ and ‘Obsession’ should give TV5 something to look forward to this year. They may still be in the experimental stage, but with the way viewers have responded, it appears that this experiment is headed in the right direction.