The logo for the 20th anniversary season of ‘Bubble Gang’. The anniversary special airs this Friday on GMA. (Logo courtesy of GMA Network)

The 20th anniversary of ‘Bubble Gang’ will be celebrated this Friday.

For this year, the annual ‘Bubble Gang’ anniversary special will be treated as a documentary, produced by none other than the GMA News and Public Affairs department. The documentary will highlight the rich history of the 20-year-old gag show, featuring interviews from past and present cast members, as well as behind-the-scenes personnel.

As always, the special will not be complete without the trademark sketches that have made ‘Bubble Gang’ so endearing. The skits will not only feature the current cast, but also some of the former mainstays as well.

Currently one of the country’s longest-running programs, ‘Bubble Gang’ first premiered on October 20, 1995. The show has attracted a loyal following over the years, and continues to gain new fans as technology and popular culture evolved.

One of the show’s driving forces is Michael V, who along with Antonio Aquitania, has been part of ‘Bubble Gang’ since its first episode. Bitoy is currently the show’s creative director, formulating most of the show’s endearing skits.

To date, ‘Bubble Gang’ has aired 1,003 episodes during its 20-year history. The documentary this Friday will be the show’s 1,004th.

The hashtag for this year’s anniversary special will be #IMBG20. For those unaware of how ‘Bubble Gang’ started, this should help them understand how it all began, and how it evolved into the gag show it is today.

GMA’s ‘Bubble Gang’ will have its 20th anniversary special next month.

The theme is still a mystery at the moment, but based on teasers from the show’s social media accounts, it appears that it will be a mostly formal occasion. The show’s current and past cast members will be on hand, as is a die-hard fan who will be invited on the said anniversary episode.

Indeed, ‘Bubble Gang’ has come a long way since premiering on October 20, 1995. Every Friday night, viewers were treated to the show’s assortment of parodies and skits that reference both pop culture and real-life situations, most of which end with the cast members showing disbelief in the most humorous way possible.

At the heart of ‘Bubble Gang”s longevity is Michael V. One of two original cast members left on the show (the other is Antonio Aquitania), Bitoy also acts as its creative director, formulating most of ‘Bubble Gang”s infamous skits and characters, not to mention composing and singing the opening theme song.

It was with ‘Bubble Gang’ where Michael V (real name Beethoven Bunagan) achieved his greatest success. Whether he’s Mr. Assimo, Tata Lino and Donya Ina, or even past characters such as Junee Lee, Yaya and Lito, Bitoy’s portrayals with these personas helped him become one of the most popular entertainers of his generation.

Bitoy even showcases his musical talent on the show, as part of his Myusik Tagalog Bersyon and Music English Version skits. One such song was ‘Sinaktan Mo ang Puso Ko’, which became a hit single.

Even the skits evolve as well, just as trends in pop culture and everyday life were also in the midst of a transformation. Just ask the long-running ‘Ang Dating Doon’, which made some numerous changes during its run.

Despite the constant changes in both the skits and the cast members, one thing is still certain about ‘Bubble Gang’: they can still make people laugh. And after 20 years, they are still going strong.

Come this November, ‘Bubble Gang’ will have its 20th anniversary special. For long-time viewers of the show, it is a deserving tribute. 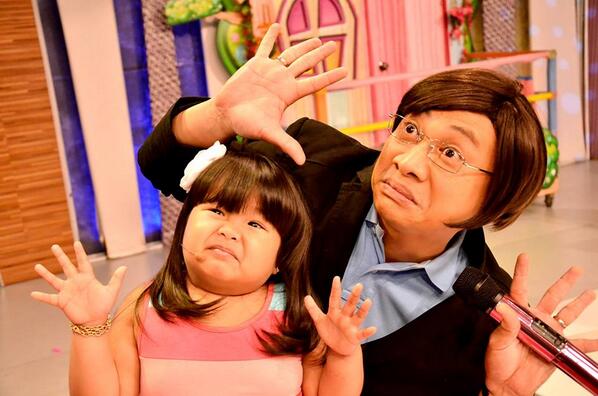 Michael V, as ‘Mr. Assimo’, with Ryzza Mae Dizon on the set of ‘The Ryzza Mae Show’. From Eat Bulaga official Twitter.

Last Wednesday, comedian Michael V posted an Instagram message which stated that he fell ill with dengue. Immediately after posting his Instagram announcement, celebrity friends and fans sent well-wishes and prayers to Bitoy through social media, with several others urging people to donate B+ blood samples in order to stabilize Bitoy’s platelet count. Bitoy is currently confined at the New Manila branch of St. Luke’s Medical Center.

Michael V is currently a mainstay of three GMA programs: ‘Bubble Gang‘, ‘Eat Bulaga‘ and ‘Pepito Manaloto‘. At ‘Bubble Gang’ he currently portrays three characters: the irate ‘Mr. Assimo’, the bossy ‘Aling Mary’, and the wise ‘Tata Lino’. On Sundays he is the titular character ‘Pepito Manaloto’, whose rags to riches tale was told throughout the series. Recently he also confirmed that he will host a game show on rival TV5, with the condition that the upcoming program does not fall on the same day as ‘Bubble Gang’ and ‘Pepito Manaloto’. However, he reiterated that the TV5 hosting job was only part-time due to his live GMA contract.

In the meantime, we wish Michael V a speedy recovery from dengue. Get well soon.