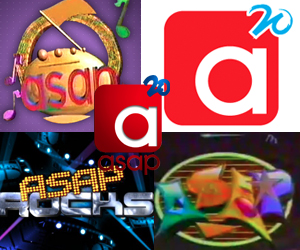 Some of the ‘ASAP’ logos that were used throughout the show’s run. (Logos courtesy of ABS-CBN)

This week will mark the 20th anniversary of the longest-running Sunday afternoon variety show in the country.

‘ASAP’ did not follow the precedent of its predecessor ‘Sa Linggo nAPO Sila’, which in many ways was an extension of ‘Eat Bulaga’ up to this point. Instead, it was conceptualized as a ‘concert party’ on Sundays, which means that the performances of ABS-CBN’s contract artists would dominate the show.

For the first two years of its run, ‘ASAP’ competed against ‘GMA Supershow’, then the top-rated show on Sunday afternoons. But on February 2, 1997, ‘SOP’ replaced the latter, setting off a heated rivalry between the two shows that lasted 13 years, mostly resulting in ‘SOP’ winning the ratings battle.

In 2003, ‘ASAP’ was renamed ‘ASAP Mania’, in response to ‘SOP”s rebrand as ‘SOP Rules’. A year later, the two competing shows launched their own spinoffs in ‘ASAP Fanatic’ and ‘SOP Gigsters’, during the height of popularity between rival talent search shows ‘Star Circle Quest’ and ‘StarStruck’.

‘ASAP Mania’ then reverted back to ‘ASAP’ in 2005, and other than the minor name changes such as ‘ASAP Rocks’ and ‘ASAP (year/anniversary)’, the show retained the ‘ASAP’ name for the remainder of its run.

The rivalry between ‘ASAP’ and ‘SOP’ came to an end on February 28, 2010, when ‘SOP’ aired its final episode. By then, ‘ASAP’ had taken over the No. 1 spot, and it would stay there for good despite the best efforts of GMA to replace ‘SOP’ with ‘Party Pilipinas’ and ‘Sunday All-Stars’.

Today, ‘ASAP’ remains the benchmark to which all Sunday afternoon variety shows are measured. With a run of 20 years and counting, it easily surpasses former rival ‘GMA Supershow’ in that regard, and remains atop the ratings game thanks to their mix of high-energy performances and top-notch studio sets.

Now what happened to ”Sang Linggo nAPO Sila’? The reformatted weekday show only managed to air for another three years, after which it was replaced by ‘Magandang Tanghali, Bayan’. The APO Hiking Society, for whom the show was named after, then returned full-time to the music industry before disbanding in 2010.

The rest, as they say, is history.