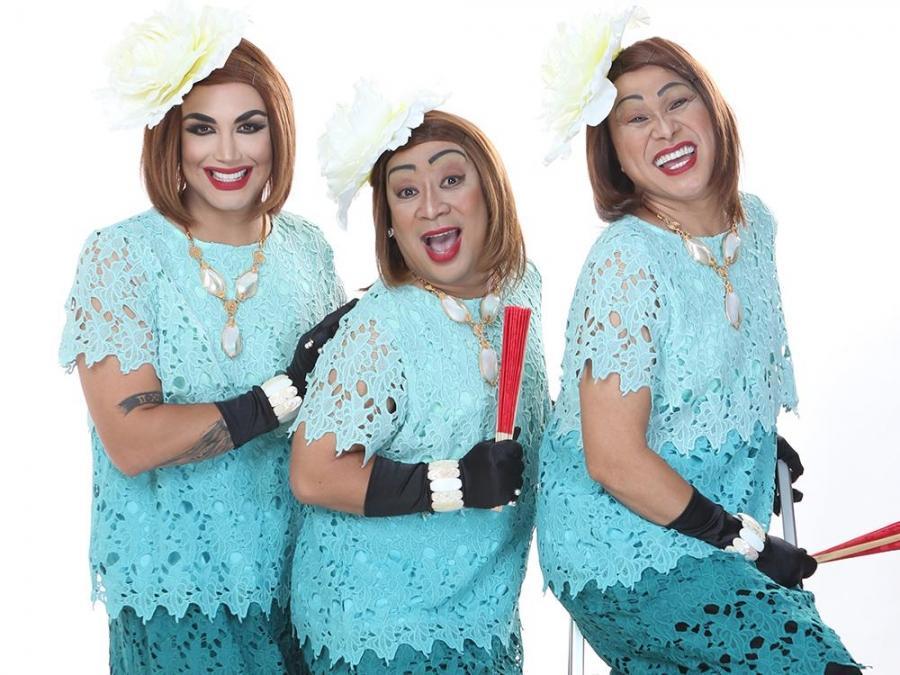 It has been the motto for GMA these past several years. The odds have not always been great for the network, but give them credit for continuing to compete despite these insurmountable obstacles.

Remember the time when ‘Gandang Gabi Vice’ was so unbeatable that GMA had no choice but to stop competing against it? For years, the ABS-CBN late-night variety show proved to be GMA’s Achilles heel, and each time GMA tried to answer with a show of their own, ‘Gandang Gabi Vice’ always shoves them out of the door.

But it seems like ‘Gandang Gabi Vice’ has seen better days of late due to the presence of ABS-CBN’s reality and talent shows (e.g. ‘Pinoy Big Brother’). Sensing that the show’s ratings is on a downward trend, GMA decided to create a new show in ‘Bossing & Ai’ in an attempt to finally bring down ‘Gandang Gabi Vice’ from its perch.

Speaking of ‘Eat Bulaga’, the d’Explorer sisters of ‘Kalyeserye’ will have a talk show of their own. Beginning today at 11:30 a.m., Jose Manalo (as Lola Tinidora), Paolo Ballesteros (as Lola Tidora) and Wally Bayola (as Lola Nidora) will host ‘The Lolas’ Beautiful Show’.

But unlike ‘The Ryzza Mae Show’, ‘The Lolas’ Beautiful Show’ will be pre-taped as Jose, Paolo and Wally also serve as on-location hosts of ‘Eat Bulaga”s ‘Juan for All, All for Juan’ segment. This means there will be no live transition from one show to the next.

‘The Lolas’ Beautiful Show’ would have been a perfect show to compete against the ABS-CBN morning talk show ‘Magandang Buhay’, especially now that GMA’s slate of animes are declining in popularity. Instead, the talk show will be placed as part of TAPE’s mandated 11:30-2:30 p.m. block and will go up against ‘Ikaw Lang ang Iibigin’.

Whether or not ‘The Lolas’ Beautiful Show’ will be a factor in the game remains to be seen. But as far as GMA, M-ZET and TAPE are concerned, there’s nothing wrong about continuing to try despite the odds.

The end of an era: Ryzza Mae Dizon’s three-year run at the pre-noontime slot will conclude tomorrow with the finale of ‘Calle Siete’. (Photo credit: Calle Siete official Facebook)

It’s the end of an era for Ryzza Mae Dizon.

After over three years and three shows that served as the appetizer for ‘Eat Bulaga’, Ryzza Mae Dizon’s run as the face of TAPE and GMA’s pre-noontime slot will come to an end tomorrow morning. That day will mark the final episode of Ryzza’s most recent program ‘Calle Siete’, which had been on the air since June of this year.

Ryzza’s run at the slot began on April 8, 2013, when ‘The Ryzza Mae Show’ debuted on television. The talk show ran for over two years and spanned a total of 721 episodes, before airing its finale on September 18, 2015.

On September 21, 2015, Ryzza took on a more dramatic role when ‘Princess in the Palace’ premiered. The series, which featured Ryzza playing the role of an adopted daughter to the president of the Philippines (played by Eula Valdes), ran for 187 episodes and ended its run on June 10, 2016.

Then on June 13, 2016, ‘Calle Siete’ premiered. The show, which is mostly comedic in nature, will have a total of 74 episodes once it concludes tomorrow.

Overall, Ryzza Mae Dizon’s three shows ran for a cumulative total of 982 episodes spanning over three years. Not bad for a kid.

But at the age of 11, it is clear that Ryzza Mae Dizon is no longer the charismatic young kid of years past. At this point, her appearances on ‘Eat Bulaga’ became increasingly sporadic, and she had been surpassed in popularity by the love team of Alden Richards and Maine Mendoza, the show’s BAES, and another budding child star in Baste.

Of course, like many child stars, the need to take a backseat is definitely a necessity for Ryzza given her continuous physical and mental maturity. Still, even as Ryzza continues to grow as a person, her continued presence on ‘Eat Bulaga’ after this week should help her maintain a larger-than-life presence on the small screen.

Come next week, ‘Eat Bulaga”s BAES (consisting of Kenneth Medrano, Kim Last, Jon Timmons, Tommy Penaflor, Miggy Tolentino, and Joel Palencia) and fellow newcomer Taki will star in a new show called ‘TROPS’. And while Ryzza will no longer be present on this upcoming show, one can only hope that ‘TROPS’ will be just as successful as any of Ryzza’s three previous shows.

For those who look forward to a post-Ryzza Mae Dizon era every weekday at 11:30 a.m., good luck.