If you missed out on Part I, Part II and Part III of this series, click on the highlighted link for more information.

Here is Part IV of the four-part series. These stories are arranged in no particular order.

The final three games of the 2017 PBA Governors’ Cup Finals were held at the Philippine Arena. Not surprisingly, the venue was packed to the rafters, thanks in large part to the presence of crowd favorite and defending champion Barangay Ginebra San Miguel.

Ginebra went on to defeat the Meralco Bolts in seven games, with Game 7 becoming the highest-attended PBA game ever with over 54,000 spectators. The victory also gave San Miguel Corporation a perfect 3-for-3 in terms of championships in the 2016-17 PBA season, with the San Miguel Beermen having conquered both the Philippine and Commissioner’s Cup as well.

TV5 started 2017 by defiantly telling viewers to ‘choose courage’ in their station ID. By the end of the year, however, courage turned to cowardice as Chot Reyes gradually turned TV5 into a sports-oriented network and stripped whatever’s left of the station’s content.

The final straw came in October when TV5 signed a deal with ESPN to rename its sports division into ESPN5. Since then, the collaboration purchased the broadcast rights to the National Football League and U.S. NCAA college basketball to go along with local sports such as the PBA and the Philippine SuperLiga. 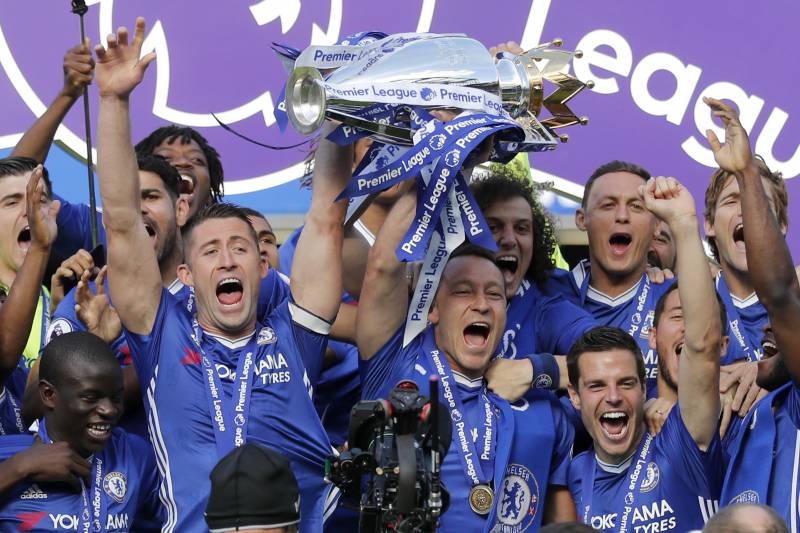 Already with the rights to the NBA, UAAP, NCAA, FIFA football, ABL and ONE Championship among other sports, ABS-CBN Sports acquired another big fish late in the year thanks to a collaboration with beIN Sport and Triple CH. The deal brought in the Premier League, La Liga and the UEFA Champions League to S+A.

The acquisition is, in many ways, beneficial to Filipino football fans who are craving to watch some of the world’s top footballers like Lionel Messi and Cristiano Ronaldo for free. However, with football having one of the most expensive broadcast rights in the world, it remains to be seen if ABS-CBN Sports’ risk will become a reward.

Suffice to say, the inaugural season of the Philippines Football League did not work out on the television side. The league faced plenty of problems with coveror PTV-4, namely weather postponements and the unexpected live broadcasts of President Rodrigo Duterte’s speeches.

By August the PFL suddenly disappeared from television as it became fed up with PTV-4’s presidential priorities. With the first season already complete, perhaps the time is now to find a new broadcast partner for next season. 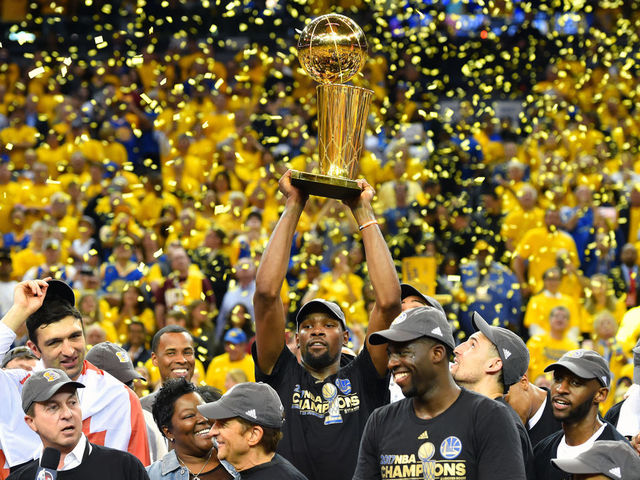 2017 was a surprisingly productive year for ABS-CBN’s NBA coverage. Beginning with the 2017 playoffs, S+A aired NBA games every day up until the finals, with a few dates reserved for doubleheaders.

Once the finals began, ABS-CBN Sports employed a simulcast on both Channel 2 and S+A. The former featured commentary from Boom Gonzales and TJ Manotoc live from the U.S. while the latter used the feed featuring ESPN announcers Mike Breen, Mark Jackson, Jeff Van Gundy and Doris Burke.

ABS-CBN also made NBA games available on S+A’s HD platform, which was previously separate and distinct from its SD counterpart. However, ABS-CBN’s surprise increase in NBA game coverage was just a reprieve for SkyCable subscribers, no thanks in part to a brewing controversy.

It was deja vu all over again as Solar Entertainment pulled out its cable channels from SkyCable amid furor over NBA broadcast rights. The network claimed that ABS-CBN owed them millions of pesos for the rights to carry Basketball TV and NBA Premium TV.

The conflict remains unresolved as of now due to conflicting statements between the two parties. This left angry NBA fans with no choice but to switch over to other cable and satellite outlets or subscribe to NBA League Pass.

Meanwhile, CNN Philippines’ ‘Sports Desk’ lost one of its pillars as Mico Halili announced his departure from the network amid rumors of a reorganization. Finally, PTV-4 announced that PTV Sports would return as a standalone program after nearly a year’s absence, with Dennis Principe once again at the helm alongside Meg Siozon and Angel Atienza.

NOT: WWE on FOX

Carriage issues also got in the way of WWE programming on FOX Philippines’ family of networks as it announced that they would cease ties with the wresting promotion after a six-year run. This was due to the two parties’ inability to agree on a renewal.

Shortly thereafter, TV5 announced that they would air WWE programs on their networks, but so far, only the condensed edition of SmackDown is currently on their lineup. As for Raw, the commercial-free 90-minute edition was made available on WWE’s YouTube page (for Philippine viewers only) while other programs can be seen via the WWE Network service.

Overall, 2017 was both a challenge and an experience for media in the Philippines. Longstanding issues and pressing concerns were all over the place as each network tried its best to resolve each and every one of them.

Looking ahead to 2018, there are still plenty more challenges to conquer and some new tasks to take. The evolution in media does not stop here and From the Tube will continue to bring in the latest news in the world of broadcasting come next year.

In the meantime, have a Merry Christmas and a Happy New Year.

The RPN name and logo was last used on air in 2012, after which Solar Television took full control of the network’s airtime. (Logo courtesy of the Radio Philippines Network)

All eyes are on Channel 9 and a possible return to the RPN name.

In a related development, Media Newser Philippines also reported through a network insider that News9, the news department of the original Radio Philippines Network, will also be revived to replace the Solar News name, with a target launch slated for the last quarter of 2014. The report came after Ramon Ang of San Miguel Corporation acquired RPN’s stake from Solar Entertainment.

Then starting August 16, cartoons and educational programs will take over SNC’s weekend morning programming. SNC’s ‘Kids Weekend’ will feature the return of ‘Sesame Street’ to Philippine television, as well as other memorable cartoons such as the ‘Care Bears’, ‘Strawberry Shortcake’, ‘Batman’ and the DC Comics Universe, and ‘Pokemon’.

With all these developments, does this mean the old Radio Philippines Network name will return on the air? Or will this lead to an even bigger plan?

Let’s face it, Channel 9 is and will always be known as RPN-9. Not Solar News Channel, C/S 9, Solar TV, ETC, or any other incarnation in its history. RPN has been an iconic brand on Philippine television, and through good times and bad, the network always provided a great show for its viewers.

More importantly, with SNC’s slow move away from a purely news-oriented network, the possibility of bringing back the RPN name on air seems certain. Even the revival of the long-running but recently retired newscast ‘NewsWatch’ is bound to happen.

But there is one problem. Ramon Ang recently acquired a 30% stake of GMA Network, which means that he now has two stations in his watch. According to Media Newser Philippines, a merger between GMA and Solar News is inevitable, unless Ang gives up partial ownership of Channel 9.

Ang’s ownership of both networks will certainly affect the fortunes of both parties. Since GMA News and Public Affairs is the more recognizable and more credible of the two, they will be more than happy to absorb Solar News into their department. And as far as viewers are concerned, Solar News remains an unproven commodity even after three years of continuous operation.

Then again, these are all possibilities and might be subject to change in the near future.

It is clear that the sun is definitely setting on Channel 9’s latest incarnation. As the ‘Solar’ name is quietly being retired from the brand, a new era in the history of the Radio Philippines Network is about to take place.

GMA should benefit more from Henry Sy and his SM chain of malls and condominiums.

GMA has been on the selling block for several months now. Several names crop up, such as Manny V. Pangilinan, owner of PLDT, Smart and TV5, and Ramon S. Ang, lead executive of San Miguel Corporation and shareholder of Philippine Airlines and Solar Entertainment. However, no one mentions Henry Sy of SM Group and his deep pockets.

For some reason, I looked forward to SM acquiring GMA. Why? Because Henry Sy is the richest man in the Philippines, and SM is an emerging conglomerate. SM, best known for its malls, has stepped up financially by building the Mall of Asia Arena and various high-rise condominiums, along with acquiring a stake in National University and revitalizing its athletics and educational program. By purchasing GMA from Felipe Gozon and Gilberto Duavit, SM should help rebuild a slumping broadcast giant, which is already suffering due to poor ratings, critically panned programming choices, and declining revenue.

Both ABS-CBN and TV5 are owned by conglomerates, and because of that, they are able to expand beyond the usual entertainment fare. In order to be at par with the other two networks, GMA needs a bigger company to thrive, and SM Group should be a good fit. But for now, it’s only a dream.