So long, Maya and Sir Chief.

After over two years, the ABS-CBN kiligserye ‘Be Careful with My Heart’ finally took a bow earlier today. The series finale featured a scene in Vigan where Maya (Jodi Sta. Maria) and Sir Chief (Richard Yap) reminisced the good times of their relationship, followed by Maya’s surprise 30th birthday and live farewell special.

Thus, for the first time since July 9, 2012, a new program will enter the fray in the pre-noontime slot.

Over the next six weeks, ABS-CBN will air three different stories as part of its ‘Give Love on Christmas’ specials. The first of these stories will run from December 1 to December 12, preceding ‘It’s Showtime’.

In ‘The Gift Giver’, Garcia will play Ernest, whose hope in life was to work hard and sacrifice just to have a complete and joyful family. But the death of his wife Laura (Alonzo) soon took its toll on the relationship between himself and his children, and now Ernest will try to renew ties with the rest of his family just in time for Christmas.

In addition to ‘The Gift Giver’, two other stories will be seen in the ‘Give Love on Christmas’ specials: ‘The Gift of Life’, starring Gerald Anderson and Maja Salvador, and ‘Exchange Gift’, starring Paulo Avelino and KC Concepcion. The two stories will be aired on a still-yet-to-be-determined date.

On the verge of once again earning the tag of ‘Philippines’ No. 1 station’, ABS-CBN rewarded its loyal viewers with an early Christmas bonus. ‘Give Love on Christmas’ will be the last ABS-CBN offering of the year, and it should provide a fitting conclusion to another banner year for the Mother Ignacia-based network. 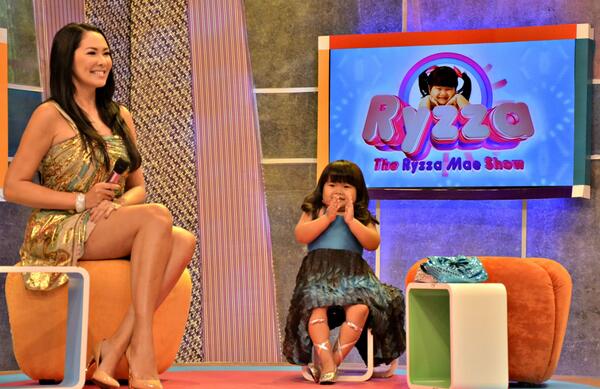 Since debuting in April 2013, ‘The Ryzza Mae Show’ gave ‘Be Careful with My Heart’ an even tougher challenge. (Photo credit: Eat Bulaga official Twitter)

‘Be Careful with My Heart’, ABS-CBN’s long-running ‘kiligserye’ series, ends this Friday, November 28. As a tribute to its unexpected success and longevity, From the Tube will look back at ‘Be Careful”s rivals and their performance against the said late morning drama series.

After vanquishing rivals ‘Kusina Master’ and ‘Cielo de Angelina’, it seems like no one can stop the reign of ‘Be Careful with My Heart’ in the late-morning slot.

And for much of February and March 2013, it appeared that GMA has already given up facing ‘Be Careful’, as old movies via the ‘Kapuso Movie Festival’ took over the timeslot opposite the aforementioned ‘kilig-serye’.

But on April 1, an episode of ‘Eat Bulaga’ gave GMA some glimmer of hope.

On that episode, host Vic Sotto gave child star Ryzza Mae Dizon a memorable and extremely special gift. That reward came in the form of a microphone and a new show called ‘The Ryzza Mae Show’.

A week later, then seven-year-old Ryzza and her eponymous talk show would make its much-awaited debut on the Kapuso network, opposite none other than ‘Be Careful with My Heart’.

As expected, the pilot episode of ‘The Ryzza Mae Show’ had a shaky start, posting ratings of 11.7 and 17.5% according to Kantar and AGB Nielsen, respectively. On the other hand, ‘Be Careful’ posted numbers of 24.4 and 23.4%.

Despite the slow start, it was clear that ‘The Ryzza Mae Show’ was holding its own against ‘Be Careful with My Heart’. Even though ratings of 10% or better remain a regular occurrence, the show was able to last longer than either ‘Kusina Master’ or ‘Cielo de Angelina’, simply because GMA and producer TAPE, Inc. kept its faith on Ryzza and her growing talents.

With ‘The Ryzza Mae Show’ providing a tougher-than-expected challenge, ‘Be Careful with My Heart’ tried to find new ways to increase their ratings. In November 2013, the wedding of Maya (Jodi Sta. Maria) and Ser Chief (Richard Yap) gave ‘Be Careful’ an impressive 27.2% rating, but the show’s ratings soon declined below 20% as audiences grew tired of its slow and dragging storyline.

While ‘The Ryzza Mae Show’ was unable to beat ‘Be Careful with My Heart’, it did give the latter fits. The fact that viewers grew uninterested on the latter may have provided a bit of a spark on the former, as evidenced by the shrinking gap in the ratings of both programs.

Having said that, it was a big achievement for ‘The Ryzza Mae Show’ to last over a year. The talk show may have not been victorious, but at least it gave audiences a new reason to watch.

As for ‘Be Careful with My Heart’, the two-year ride ends this Friday. With that, From the Tube wishes the show the best of luck.

‘Give Love on Christmas’, a three-week Christmas special, premieres on December 1 on the soon-to-be vacated timeslot of ‘Be Careful with My Heart’.

‘Be Careful with My Heart’ easily overwhelmed ‘Kusina Master’, hosted by Chef Boy Logro (above), during its first few months on the air. (Photo credit: GMA Network)

‘Be Careful with My Heart’, ABS-CBN’s long-running ‘kiligserye’ series, ends this Friday, November 28. As a tribute to its unexpected success and longevity, From the Tube will look back at ‘Be Careful”s rivals and their performance against the said late morning drama series.

On July 9, 2012, ‘Be Careful with My Heart’ debuted on ABS-CBN’s late-morning slot. The then-debuting series introduced viewers to the characters Maya and Ser Chief, portrayed by Jodi Sta. Maria and Richard Yap, respectively.

In its maiden episode, ‘Be Careful with My Heart’ registered ratings of 14.1 and 15.2%, according to AGB Nielsen and Kantar figures, respectively. The series defeated its first rival, the then-dominant GMA cooking series ‘Kusina Master’ of host Chef Boy Logro, who ended up with paltry ratings of 13.5 and 8.8%, respectively.

Soon after, ‘Be Careful’ began to overwhelm the once-confident ‘Kusina Master’, and by October 22, the latter show had been demoted to an earlier timeslot, in favor of ‘Cielo de Angelina’. At this point, ratings of 20% or better were a regular occurrence for ‘Be Careful’.

However, on November 12, ‘Kusina Master’ returned to its original 11:30 a.m. timeslot, thus facing ‘Be Careful with My Heart’ for the second time. But it bombed even further in the ratings, and on February 18, 2013, it was moved back to the 10:00 a.m. timeslot, this time for good.

Make no mistake, ‘Kusina Master’ had been a force to be reckoned with prior to the entry of ‘Be Careful with My Heart’. Chef Boy Logro’s unorthodox and fast-paced cooking style were a hit with audiences, and his ability to interact and entertain with the viewers helped him become a household name.

But once ‘Be Careful with My Heart’ entered, it was all downhill for ‘Kusina Master’, to the point that it was demoted again to an earlier timeslot, and then reformatted in the final year of its run. Still, the show was fortunate to have lasted over two years, thanks to its loyal viewers who kept the show alive.

‘Kusina Master’ was cancelled on May 9, 2014, and was replaced by ‘Basta Every Day Happy’.

Tomorrow on Part II, From the Tube will look back at ‘Be Careful with My Heart”s next rival, ‘Cielo de Angelina’.

Another year is about to end. But before the calendar flips to 2014, here is a look back at the year that was in television and radio. This article will focus on ABS-CBN, who dominated television ratings all year.

Everything went right for ABS-CBN. And it showed in its weekday offerings. Primetime Bida teleseryes dominated the Kantar ratings, led by the year’s top-rated series ‘Juan dela Cruz’. ‘TV Patrol’ remains the most preferred evening newscast, while ‘Showtime’ introduced the most talked-about ‘That’s My Tomboy’ and ‘Kalokalike’ segments that propelled them atop the noontime pyramid. And thanks to the highly-anticipated November wedding between Maya (Jodi Sta. Maria) and Richard ‘Ser Chief’ (Richard Yap), ‘Be Careful with My Heart’ continued to lord over the late morning slot.

The Kapamilya network continued to rack up ratings victories on weekends, aided by its reality competition shows ‘The Voice of the Philippines’, ‘Masterchef Pinoy Edition’, and ‘Pilipinas Got Talent’. Also helping their cause were the long-running anthology ‘Maalaala Mo Kaya’ and game shows such as ‘Bet on Your Baby’ and ‘Kapamilya Deal or No Deal‘. ‘Gandang Gabi Vice‘ and ‘ASAP’ remain the most talked-about shows on social media.

Even its sports offerings beat the competition. The Miami-San Antonio NBA Finals and the La Salle-UST UAAP Men’s Basketball Finals scored big in the ratings and in the hearts of netizens. The network also continued to showcase top-notch boxing matches such as the ‘Pinoy Pride’ series and fights featuring Nonito Donaire.

While they were able to enjoy high ratings on primetime, there were still some shows that ended up lasting less than half a year. Examples include ‘Bukas Na Lang Kita Mamahalin‘, ‘Apoy sa Dagat‘ and ‘Muling Buksan ang Puso’, whose storylines required only at least four months of airing. Also getting the ax were the sitcom ‘Toda Max’, after lead star Robin Padilla reportedly left, and ‘The Buzz’, which was reformatted as ‘Buzz ng Bayan’. ABS-CBN’s programs were likewise not spared from MTRCB’s iron hands, as ‘ASAP’ was reprimanded in February for Anne Curtis’ sensual outfit and performance.

ABS-CBN personalities were also involved in various controversies. ‘Kris TV‘ was nearly cancelled when its host Kris Aquino announced her resignation after getting embroiled in a custody case with then-husband James Yap for their son Bimby. However, a month later, Aquino announced that she would only take a ‘leave of absence’ in June. As of now, ‘Kris TV’ continues to air in the morning slot.

And last November, Korina Sanchez criticized CNN’s Anderson Cooper regarding the latter’s report about the slow delivery of goods to the victims of Typhoon Haiyan (Yolanda). As a result of the negative reaction she received from netizens, Sanchez took a ‘leave of absence’ before returning to duty a month later.

ABS-CBN capped off the year by showcasing the love team of Kathryn Bernardo and Daniel Padilla on ‘Got to Believe’, young child star Raikko Mateo on ‘Honesto’, and budding star Jessy Mendiola on ‘Maria Mercedes’. For 2014, they are expected to introduce another potential star in Julia Barretto on ‘Mirabella’. Going forward, ABS-CBN is poised for another banner year, and as long as their products continue to entice audiences, ABS-CBN will remain the country’s top network.