The past few weeks have not been good for ‘Carmela’. Rival series ‘Got to Believe’, scheduled to end this March 7, has not only beaten the former in its timeslot, but also out-trended them in social media. In addition, TV5’s PBA Philippine Cup playoff games have leapfrogged past ‘Carmela’ in terms of both ratings and social media impact. And now a new rival program awaits.

‘Ikaw Lamang’ will be the first project together for Montes and Martin since their highly-rated series ‘Walang Hanggan’ two years earlier. It will also mark Chiu’s first primetime project since ‘Ina, Kapatid, Anak’, and her second without on-screen partner Xian Lim. Chiu, Martin and Cuenca also previously worked together in ‘Tayong Dalawa’ in 2009.

The upcoming drama series will be a huge test for the four lead stars in terms of on-screen chemistry, familiarity and their acting abilities. But viewers should not worry. ‘Ikaw Lamang’ is a showcase that pits four of the most bankable personalities in the small screen, and when mixed with a well-written script and a highly touted supporting cast, it translates into a potentially high-rated drama series that will attract many viewers.

Which means that more problems lay ahead for viewers of ‘Carmela’. Despite debuting strongly last January, ‘Carmela’ has suffered of late thanks to the lack of social media presence and declining ratings. The lack of interest and viewership surrounding ‘Carmela’ should be a cause of concern to GMA management, who will now pressure the writers to improve the script and develop the characters further. And when up against a star-studded cast in ‘Ikaw Lamang’, they are at a disadvantage.

With that, good luck to the writers of ‘Carmela’. I hope you improve its storyline in order to impress and attract viewers, otherwise ‘Ikaw Lamang’ will continue to overwhelm the show just like what ‘Got to Believe’ did.

Villainous roles should be a welcome shift to both Jennylyn Mercado and the GMA Network as the viewing habits begin to change.

The upcoming GMA teleserye ‘Rhodora X’ will be the most challenging to date for Jennylyn Mercado. The series will feature Mercado portraying a mentally insane character with a split personality, and as the teasers show, it appears that playing the villain may be more appealing to her these days.

In recent years, several actresses showed their versatility by playing heroic characters in one series, followed by a villainous role in the next, and vice versa. For example, both Julia Montes and Melissa Ricks initially played the villain and hero in ‘Mara Clara’ and ‘Nasaan Ka, Elisa?’ respectively, but when the two were cast in ‘Walang Hanggan’, their roles were reversed. And Maja Salvador, who will play the villain opposite Angel Locsin in ABS-CBN’s ‘The Legal Wife’, played a heroic sidekick character with Kim Chiu in ‘My Binondo Girl’ before playing ‘kontrabida’ against her in ‘Ina, Kapatid, Anak’.

If Jennylyn Mercado wants to evolve and mature as an actress, she needs to prove her worth by playing the bad girl. ‘Rhodora X’ is a good opportunity for her to showcase a different facet in her acting. And if GMA is dead serious in returning to the win column, they need either one of their veterans to play ‘kontrabida’ against upcoming young talents, and Mercado is a perfect fit.

With their primetime programs currently shackled by ABS-CBN’s, a change in philosophy is needed for GMA. And transitioning Jennylyn Mercado to a ‘kontrabida’ may help reverse their doldrums.

This past week ‘Genesis’ and ‘Akin Pa Rin ang Bukas’ officially aired their final episodes. However, with production still in the works for ‘Carmela’, ‘Rhodora X’ and ‘Kambal Sirena’, GMA Telebabad decided to fill in the void with ‘Kapuso Primetime Cinema’.

As it turned out, it was clear that GMA Telebabad is conceding to ABS-CBN’s Primetime Bida. The last few years saw Primetime Bida dominate Telebabad in the ratings, helped by hit teleseryes such as ‘Budoy’, ‘Walang Hanggan’, ‘Princess and I’, ‘Juan dela Cruz’ and current favorites ‘Honesto’, ‘Got to Believe’ and ‘Maria Mercedes’. ABS-CBN was also successful in marketing younger talents, something GMA could not afford to do.

In addition, due to mounting operational losses GMA began to adopt the TV5 way by airing more Tagalized foreign films. This was none more evident than in ‘Kapuso Primetime Cinema’. But unlike the typical Tagalog-dubbed films on other blocks, KPC airs movies voiced by Kapuso talents, perhaps to add to their talent fees. To me, this movie block became a clear picture of GMA’s concession of defeat to ABS-CBN.

Despite that, ‘Kapuso Primetime Cinema’ will only be a temporary showcase, as the aforementioned ‘Carmela’, ‘Rhodora X’ and ‘Kambal Sirena’ will debut in the coming weeks. But even as GMA unveils a new slogan called ‘Puso ang Una’ in hopes of regaining the top spot, I expect ABS-CBN to overwhelm GMA once again on primetime. 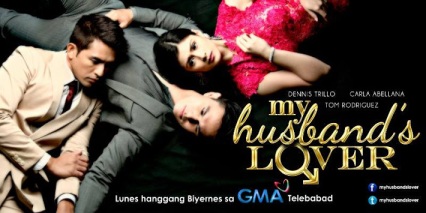 A month into its run, ‘My Husband’s Lover’ has gained a lot of attention for its gay-centered storyline.

Just a month into its run, ‘My Husband’s Lover’ on GMA 7 has been earning a lot of attention for its storyline centering on a love affair between two men, played by Dennis Trillo and Tom Rodriguez, and the subsequent jealousy of the latter’s wife, played by Carla Abellana. The publicity that ‘My Husband’s Lover’ received throughout its current run made its way into newspapers, social media, and even on television and radio. However, in terms of ratings, the said drama series’ fortunes have been mixed.

In a recent AGB Nielsen report for the week of July 1-7, ‘My Husband’s Lover’ averaged 7% higher than the final week of ABS-CBN‘s ‘Apoy sa Dagat‘, whereas on Kantar’s report for the same week, it was ‘Apoy sa Dagat’ who averaged 10% higher than ‘My Husband’s Lover’. Obviously, Kantar’s figures favor ABS-CBN’s, while Nielsen’s tend to lean on GMA 7’s programs, a figure that has stayed mostly the same since the Kapamilya network’s defection to Kantar.

Notwithstanding the mixed ratings reports, I think GMA 7 found a way to regain the attention of their audience after introducing ‘My Husband’s Lover’. For the past few years, GMA’s primetime fortunes have sunken a bit, in part due to the presence of the Kapamilya network’s highly rated programs such as ‘Walang Hanggan‘ and ‘Ina, Kapatid, Anak‘. During this period the network introduced some of the most poorly written and stale teleseryes after revolutionizing themselves with the fantaserye genre during the latter part of the 2000s. Some attribute to the overemphasis on its veteran talent, others due to lack of creativity.

Eventually GMA decided to tackle homosexuality in their next project, which eventually became ‘My Husband’s Lover’. In the light of recent news involving celebrities coming out of the closet (e.g. Charice), the launch of the program proved to be perfect timing. From then on people continued to talk about it and the program even gained the attention of the Catholic Bishops’ Conference of the Philippines, who told the networks to remain sensitive in the airing of their programs.

The year so far has been good for the LGBT community. And with the airing of ‘My Husband’s Lover’, the issue of homosexuality has found its place on television storylines. It was a brave and calculated risk that people should be proud of.