The biennial Southeast Asian Games is a showcase where the Philippines typically excel as one the top powers in the region, along with Indonesia, Thailand, Malaysia and Vietnam. However, in this year’s event held in Myanmar, the Philippines is languishing near the bottom of the medal tally, owing to the host nation’s inclusion of indigenous sports and a fewer-than-expected athlete delegation. And the lack of television coverage justifies that.

In the past, the People’s Television Network was responsible for covering most of the SEA Games events, from the opening to the closing ceremony. However, with PTV suffering from negligence and a lack of funds, coverage of this year’s SEA Games was restricted only to the internet and print media, with a few key sports being covered on TV.

ABS-CBN’s UHF channel Studio 23 is currently airing the Philippines team’s men’s basketball, women’s football and boxing events. These events are being aired simply due to its high interest; other sports such as swimming and athletics were not included due to its lack of viewership and Studio 23’s loaded programming.

Clearly there is little attention to the SEA Games these days. The Philippine Olympic Committee is now focused on training its athletes for the Olympics, with the hope of giving the Philippines its first gold medal. While the SEA Games will remain a part of the POC’s schedule, the event is now being treated as a ‘developmental meet’ for the nation’s up-and-coming athletes, and not as an important multi-sport event.

It is unknown if Philippine TV coverage of the SEA Games will return to normal come the 2015 meet in Singapore. For now, the important matter is for the athletes to continue their improvement and succeed, in hopes of preparing for a higher level of competition.

And me having watched this Shield vs Usos match with the Punk promo later on but nothing else really. Because I can, too. Wasn’t really in the mood for anything else and when I’m being able just to have the best I leave it there. But I don’t really know (until now) why I’ve transcribed several of Dean Ambrose quotes. Certainly because I can this as well but is it useful? Because on YouTube, Tumblr etc. there are certainly several little video outtakes of it by now. But as I’m someone for the written word I’m typing that down – right here, right now.

Whatever happened to their famous tagline, “Iba na ang may pinagsamahan?” For younger generations following local hoops, they are oblivious as to why older generations who have been a fan of the league are shaking their heads as to the treatment being given by the San Miguel umbrella to its loyal players, most notably, Danny Ildefonso and Danny Seigle. Arguably, these two players were the cornerstone of the franchise after the post-NCC powered and Nelson Asaytono-led San Miguel Beermen and they did a satisfactory job not only resurrecting a dying fan base then but also increasing its fan power.

But, as we all know, the league itself is a business. Team owners will do what is best for business. Am I surprised to see this franchise resort to this tactic? No, because I have seen this franchise trade away beloved players after these players have given everything to this franchise… 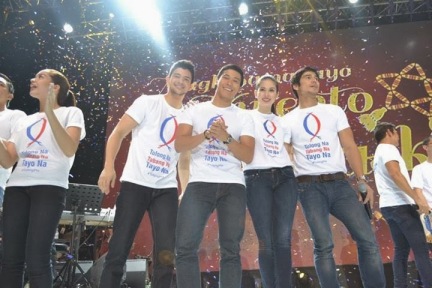 When Typhoon Haiyan (Yolanda) struck the country a month ago, it left a trail of dead bodies, fallen trees and damaged structures. After the typhoon’s impact became all too gruesome for the human mind, the international community started donating sums of money and relief items for the victims of Haiyan. And ABS-CBN was among those who came to the rescue.

Days after Haiyan left the country, ABS-CBN launched their charity shirt bearing a fish-like symbol and the phrase ‘Tulong Na, Tabang Na, Tayo Na’. The shirts became available at the ABS-CBN Store in the network’s Quezon City headquarters last November 12, and was later sold online through Shopinas.com and at Ayala Malls in the country. It was also sold during various ABS-CBN-sponsored events such as mall shows.

The ‘Tulong Na’ shirt became an immediate hit thanks to its cheap price (P250) and strong message, not to mention additional publicity thanks to 30-second ads, a telethon, and television programs featuring ABS-CBN personalities. And last November 16, the Kapamilya network held a benefit concert at the Smart Araneta Coliseum, with the shirt being given for free to ticket buyers.

The said concert from November 16 was such a success that another concert was held at the same venue last December 10, again with the ‘Tulong Na’ shirt distributed along with the tickets. ABS-CBN typically holds a Christmas concert at this time of the year, but on this night, the concert was about raising hope and prosperity to the victims of the typhoon. The concert entitled ‘Kwento ng Pasko: Pag-asa at Pagbangon’ will be aired in a two-part special this weekend on ABS-CBN.

In many ways, the popularity of the ‘Tulong Na’ shirts capped off a successful year for ABS-CBN. With top-rated programs outplaying the opposition almost every day, and with more potentially successful programs in the works, the Kapamilya network is definitely poised for bigger things this 2014.